Instrumental implications of the cruise berth

Official name of this project: Instrumental implications of the cruise berth. Processes, decisions and coordination on the realisation of a sustainable (cruise liner) destination.

Today Region Gotland is facing an organisational and managerial challenge in connection with the establishment of a cruise berth and the expected expansion of the hospitality industry. Different administrative branches are responsible for various interlinked sub-projects, whilst one can assume that the organisation basically is designed for efficient administration and not primarily to support the development and management of new projects. At the same time, significant consideration must be paid to important natural, cultural and social values. Together with this, the region must also act as a regional developer, entrepreneur, client and not least as a representative of public interests and citizen participation.

Previous research has demonstrated that projects such as contracted and organisational undertakings tend to focus primarily on definite and fundamental dimensions, such as function, time and cost. It is more difficult to ensure other qualitative dimensions of such projects. Key is how sustainability issues (environmental, economic, social, technical) are taken into account and applied.

This study is based on an earlier project at Gotland University College that focused on wind mill development in the Baltic Sea and on the island of Gotland. It examined the local, national and global influences that had contributed to the development of the first wind turbine to the organisation of today's windmill market. A general learning goal for this as well as the previous project is how new businesses evolve, are organised, coordinated and for example create new markets in an interplay between political visions, local practices and technological prerequisites.

As in the previous project, we assume that efforts such as those invested into wind power and a cruise liner berth cannot be explained without considering the connections to surrounding players, stakeholders and networks. Earlier, we used windmills as a concrete example of the organisation of a new market that involves complex decision-making processes and a typical hybrid problem on this (post) modern society, where the global and the local, the human and the technical constantly interact. At that time we started from the assumption that the organisation of a new business, characterised by different views on sustainable development, is established by decision-making processes that rely on the norms, beliefs and practices exercised in the field.

This project has two all-embracing issues. The first is of a general organisational and managerial nature. It focuses on the complex managerial and coordination situation that arises when a mostly administrative player, such as Region Gotland, is expected to operate and develop multiple interlinked innovative projects. A particularly important question is how the project can manage such a complex and fluctuating set of special interests – commercial as well as social/civic interests – whilst ensuring a flexible execution process.

The other issue is whether and how aspects largely related to sustainability will be reflected in the decision-making and execution processes of the cruise liner berth project. Here, we will contemplate the issue of sustainability from different perspectives where the ecological, social/cultural, economic and technical ones are key. In other words, we intend to examine whether, when and how “the sustainable visit” is manifested practically to realise a cruise ship berth that includes associated reception means and a logistical infrastructure.

Two sub-studies are planned. One study will look at the historical past. We will analyse the decision-making and managerial process from the initial phase up to the decision to build the cruise berth. The purpose will be to document and analyse how the project came about, what decisions were made in the interim, by whom and under what assumptions. Of particular interest is to follow how potentially different interests are coordinated and how the different perspectives and approaches to sustainability have been expressed in the decision-making processes between interacting stakeholders.

In a longitudinal study, the decision-making and managerial process of the project, from today onwards to 2018, will be monitored in order to analyse how the project will be executed, which issues and criteria will become central in the process and what their impact will be on the execution of the project. In this regard, we intend to study how different stakeholders interpret and respect the notions of sustainable development in the hospitality industry, who will be involved in the decision-making processes and what the interaction between private and public players will look like, and also that between local, national and international stakeholders in the Baltic Sea region. 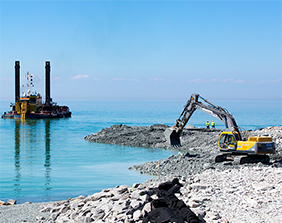